I had fished all my life, albeit in some pretty dicey places with my dad, but I had never done so on the ocean. It occurred to me I needed to jump into that sooner rather than later, and with total commitment. Living on the ocean as I did back then, I had opportunity and access, so I set out to learn how to work and fish on the greatest of waters. This was how it began.

How can one say they didn’t know John Wayne but that they “knew” John Wayne? Well, I can kind of say that. I did, in fact, wave at John Wayne once, and he waved back as I sailed past his house in Newport Beach, California. He was sitting in a lawn chair out on a small spit of land at his home, and as I sailed past, we waved, as is customary and proper behavior for mariners. But what I’m really referring to is the part of the story that takes into consideration John Wayne was just an actor, but through his acting, he served to embody a vision of what it meant to be a true American. This persona is one of honesty, integrity, kindness, bravery, and a commitment to honorable behavior. I don’t know if John Wayne was any or all of those things, but I was fortunate enough to know such a person that did, in fact, embody these difficult to achieve traits and values. His name was Tom, Tom Shanahan to be more specific. He is the person that enabled me to fish upon the ocean and, in that process, taught me much more about the art of living in a right way. 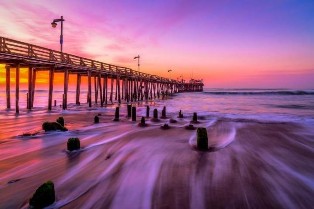 Tom was a merchant seaman, traveling the world in his youth, on a succession of freighters and other ocean-going vessels, until he finally came ashore to live in Anchorage Alaska during its more primitive days. He worked as a lineman for Alaska Power and Light in his early time there. He showed his penchant for imagination when, as a side business, he undertook beach netting for salmon and acquiring the makings of the first ever circus in Alaska. His circus would tour in the summer, when a lineman’s job was least demanding, and his first stop every year would be the nearby army base for the free lightbulbs and green paint they provided him. As a result he probably could have called it the “green circus”, but at least all the light bulbs work.

I came to know him after he moved from Alaska to a little town named Capitola, California, so named because in its’ birth the town had the aspiration to be the capital of California, a failed dream to say the least, but a good and brave dream none the less. Tom had purchased an ocean wharf there, a wharf that was quite old, so old that in the completion of its building the wharf had been dedicated by Abraham Lincoln himself. The original purpose of the wharf was to load potatoes and lumber on to ships, so it was sometimes called “The Potato Wharf”. Owning a wharf is not for the faint of heart. The complication of fires, 20-foot waves, and the incessant assault by torpedo worms makes a wharf owners life both daily eventful and punishing. Fire calls at 3am, because somebody had dropped a cigarette between the planks, or missing fishermen in one of the wharfs rental skiffs that are lost in the fog and in need of rescue are just a couple of the daily bizarre and challenging events that beset a pier owner. But Tom was ideally suited for this roll, being confident he could fix any problem and endure any challenge.

I began fishing from the pier while working in Silicon Valley. I didn’t enjoy living in Silicon Valley, so I lived in Capitola, just a couple of blocks from the wharf on Depot Hill. Tom took it upon himself to satisfy my every foolish question and seemingly inexhaustible supply of enthusiasm for fishing. We became friends.

Tom was always there to help anyone and he would seemingly brave any danger to answer the need for assistance, some of which were mighty dangerous needs. I will relate one example as follows;

On Sunday, October 8, 1972, a bright, calm, and clear morning dawned on Monterey Bay. It was the perfect day at the beach. The air was calm and warm, the water almost bathtub tepid and welcoming. There was a sailboat race with many sailing vessels racing long distances around a course traversing much of the Bay. Fishing boats dotted the water for miles close by Santa Cruz, enjoying the end of summers’ good luck. There is a phenomenon that rarely happens that no mariner or weather prognosticator can predict. It is the result of the jet stream, a flowing river of air that flows at high altitudes around the earth at speeds of 40-100 miles per hour or more. At these rare events, the jet stream falls all the way to the ground, or water as the case might be, and that is what happened that splendid day in Capitola.

Suddenly, and without warning, and with bright blue sky’s shining, the wind accelerated from dead calm to speeds of 45-60 miles per hour with gusts close to 100 miles per hour in minutes. The coast guard was swamped with calls of boats in distress and, without sufficient means to save lives, the Coast Guard called for assistance to known good seaman, one of those first coming to mind to them being Tom Shanahan. Tom, in his calm quiet way, did not hesitate to set events in motion, selecting a 20-foot Evinrude tri-hull boat that was stored nearby, Tom ordered the deck crew to launch it into the waves from a crane on the pier. By this time the waves had reached the height of the pier decking sending rippling jets of water up between the planks on the crest.

The fall was 15 feet or more down on each wave to the trough, so launching by crane was an exercise in careful timing and foolhardy luck. With the boat threatening to be dragged sidewise and swamped by the passing 15-foot walls of water, and the crane threatening to be broken from its’ moorings, the entire operation was fraught with peril. But Tom was ready to go, and seeing me nearby, asked if I was ready to help him tow in boats that were in danger of sinking. It is a good thing that I normally give potential actions only limited thought because had I thought about it, I may have not climbed in the boat. But in my continued belief that overthinking often leads to a more than boring life I jumped into the boat with Tom as he and I endured the precarious launch and began a voyage into the tempest.

For the following hours, and through the rescue of several boats, we were pounded by the sea. Taking a foot or more of water over the bow became an expected and frequent event, filling most of the self-baling craft many times. Tom would gun the engine, the water would pour over the stern, and on we would go. The wind could be seen ripping the top two feet off the waves, turning them into churning white foam froth covering the sea. Not too far away, the 100-ton sailing schooner Shamrock IV, a historic sailing vessel, wrecked on the beach and was later destroyed. Thanks to Tom, people were saved, and tragedy was avoided. I was given a memorable insight into the temperamental power that was the sea.

Through all of this Tom quietly manned the wheel, artfully guiding the boat through the chaos. I was left amazed at his skill and the degree to which he knew the waves and the water. It was much like observing amaestro at work. My job was to bale, pull kelp strands off the windshield, hook up towing lines, and to watch and learn. This is only one brief insight into Tom, there are many more tales of courage, perseverance, and honor that are ascribed to him. He was for me, a friend, a teacher, and an invaluable visitor in my life. And it does prove my point, I really did know John Wayne.