As I have mentioned previously, every commercial fisherman wants a bigger boat. The ocean is simply too large and intimidating to not feel that way all the time. Being a combination of thrifty and foolish, I decided to build my first boat, a 52- foot 50-ton steel schooner. The boat was built in Wilmington, 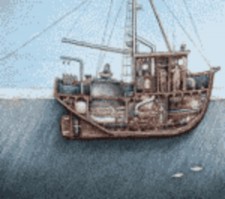 California, “Wilmas” to the locals, at a yard I rented. Wilmington was not part of the bright and shiny part of Los Angeles. It was the raw underbelly made up of refineries, junkyards, and a run-down community of almost all Hispanic people. These people, almost all of them as far as I could tell, were wonderful people that cared about each other with intense loyalty, and in spite of their chanced station in life, took pride in themselves and in their service to others. Even the gangs that populated the area kept their problems reserved to each other, treating everyone else with a kind of belligerent respect. 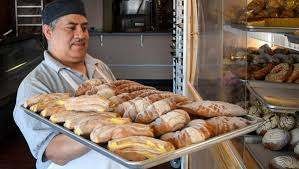 I came to really enjoy and value my time in Wilmington. Early each morning, around 5am, the Mexican bakeries would open. Everyone would pass through to buy fresh pastries of all kinds, baked throughout the previous night. Hot fresh coffee was at the ready in large quantities as well, and it was a perfect start to the day for these hard-working people. When lunch time arrived large and delicious burritos were available around town and out the back door of some homes that were, in fact, very large, very delicious, and more than enough to get you through an afternoon of hard labor. The yard I had on “E” Street was surrounded by barbed wire and equipped with two large dogs to serve as a deterrent against the constant visitation by heroin addicts, loafers, and other creatures of opportunity that constantly cruise these kinds of neighborhoods seeking to live off the fat of the land. From time-to-time addicts would come up to the fence and ask, with violently shaking hands, if I had any welding work to spare. Being the smart ass that I sometimes was and am, I would ask if they specialized in spot welding. Welders will get the humor.

This journey of the F/V Shearwater would not be complete without the inclusion of Char. Without her, this vessel would have remained raw steel, and without her, my human vessel would remain more primitive, more incomplete.

My family, long ago, were generally Vikings, or they probably knew a lot of Vikings. This is because genetically, according to several DNA tests I have had the curiosity to have done, my heritage is about 60-70 percent Norwegian at least. Bear in mind that Vikings had this little proclivity for taking women, whether the women were thrilled about the prospects of going on a trip or not, from everywhere they went

and bringing them home. And, that where the Vikings went was, quite literally, everywhere, meant that being Norwegian can mean a lot or mean very little. It is a matter of context, and it can also matter a great deal in DNA testing whether you test the mothers’ line or the father’s line. The fathers were almost always from Norway. The mothers? Well, not so much.

Genes descended from the Cree of todays’ Eastern Canada are another small part of me. Given Viking and Cree’s heritage, I get the sense that I can get away with a lot and blame my crazy ancestors. I often do things that are unexpected. I also try to embrace things that are equally thus. So, with the greatest curiosity, I joined a Chinese family and became part of that family for over 10 years. Consequently, my education began about a culture so durable in its customs and beliefs that it has lasted over 5,000 years. This makes the western culture of Europe and North America veritable toddlers, by comparison, imparting the image of a wobbly child with a badly sagging diaper. Ok, that’s not the most generous of images, but hopefully, you get my point.

Charlene Leong, Char to her friends, is from a family of traditional Chinese people from Southern China. Char is a wise soul. She cares for all things around her, and has unceasing loyalty to those that she independently concludes are deserving of it. Her family lived in the Santa Clara Valley for many years, after traveling from China, operating a grocery store in Sunnyvale, the veritable heart of what would become “Silicon Valley”. Char, like her other Chinese contemporaries there, had grown up as a Chinese child in an American town. As a result, she knew how to exist in two cultures. For some reason beyond my understanding, she decided I was worthy of knowing and worthy of her invaluable time.

Char was an identical twin, and Darlene was her sister. This is rare in the Asian race. I quickly learned that I could be close to Char but never as close as her twin. An interesting idea. Char and I were together for more than 10 years. I would claim that she partially civilized the infidel and brought peace to my life during that time. We parted because our desires for the future were different.

Mine being exploration and testing of new boundaries, hers being continuation, obligation to family. She remains one of my lifelong best friends. Without her, parts of me would not exist at all.

However, to reflect, for over 10 years, I was a fully accepted member of a Chinese family, treated kindly and with the complete acceptance of who I was becoming. This concept of who I was becoming hints at a key difference between a Chinese family and a more western family, in my view. On the whole, Chinese families seem to be much more embracing and nurturing to change than their western counterparts. This may seem counterintuitive, but for me, my experience indicates otherwise. Suppose one’s station in life changes, coming from humble beginnings to become a successful business person or multimillionaire, for instance. Chinese families seem to celebrate the change and increase their respect for the individual. Western families seem much less willing to alter their view, generally, seeming to elect to dwell on the persons’ past station and indiscretions. At times, it seems, western families are often cruel in this way, focusing a good deal on jealousy and envy rather than celebration and acceptance. During and after Char and I were married, I recall being treated with complete respect and kindness by her family. That is the legacy of 5,000 years of Chinese culture. Those ways are enduring, which is the essence of the Chinese culture, Buddhism, and the spirit of family. Enduring, unceasing, endless…

As the F/V Shearwater rested, floating upon its final new salt water home, I was humored by the knowledge that underneath all of the many coats of beautiful paint consisting of inorganic zinc, high build epoxy, and linear polyurethane, there rested a 52-foot-long 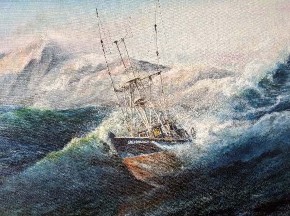 blackboard annotated in English and Spanish, with detailed drawings of how the boat was built. You see, Jesus Ramirez, my foreman, spoke no English at all, and my Spanish remained embarrassingly inadequate to the task. Jesus and I would draw out each new thing to be built, in great detail, with soapstone welders chalk, and annotated in English and Spanish, so that we each clearly understood the task at hand. Those drawings will never be seen again, but they are there, as would be the image of the Viking Lady to come later. With the vessel complete, the F/V Shearwater was born. I suppose the laying of the keel was the actual date of birth, but I always like to see if they float first before I give credit for birth.

The boat was launched at the San Pedro Boat Works in San Pedro, California. The journey began and spanned fishing operations from San Pedro to the remote reaches of the Alaskan north Pacific Ocean. It was a beautiful boat and used to be referred to in Sitka as “The Tank” because when the weather kept another ship from going to town, The Shearwater could go. The boat now calls Sitka its home and can still be seen between fishing operations. The captain, Dennis, is a good guy, from Iowa, no less.