Now, at over 70 years old, each new morning these days seems like a miracle. Another day I did not expect, and in some ways, might not deserve at all given my propensity for risk and persistence. But I will celebrate each new day nonetheless, assuming the universe does indeed convey good fortune even on the possibly undeserving at times. And I will take “lucky” over “good” any day. “Lucky” lowers the bar. If you are good, there is this irrational expectation from your contemporaries that you are supposed to be good every day. They say things like, ‘Look, he was good yesterday but his socks are different colors today and when I said his name, he had to think about it for a minute before answering, maybe he’s losing it!” When you are lucky, people just exclaim, ‘Oh, he was just lucky again yesterday, it won’t last!”. So, as I said, I’ll take “lucky.”

Now being at an age where I suppose I am expected to be “reflective,” I reflect at times on the course of life and how feelings change as the numbers count down on the chronometer of existence. They may be Roman numerals, which would be way cooler, but probably not many people today would be able to read them.

So, here is a reflection. Life, at times, can take on the aspects of a roller coaster ride. Waiting in line takes seemingly forever, then there is the thrill of the thought of heading out as you get closer to the front of the line. Time seems to crawl slowly by as you are finally anchored aboard your car as events begin to get moving. Early on in the ride, there are a few sharp turns and quick drops to add to the anticipation of the bigger thrills to come. Then begins the long slow grind to the top of the big hill at the end. Passing over the crest of this hill, there is just that brief moment of weightlessness before gravity seizes you and you plunge down at breakneck speed. The fall is filled with the feeling of being completely out of control, your hands grasping the sides of the car.

It seems inevitable that the moment will end in disaster. Speed and gravity seem to have you at their whim, and you wonder for a moment if you will survive. But, in the end, the roller coaster almost always safely pulls into the station, and you bound out, ready to get in line again. This is where the analogy ends because life, unlike a roller coaster, never reaches the station for reboarding that we know of. The ride always ends with an often-disastrous crash. From there, only one’s religion can offer any assurance or consolation of what follows next. Wow, what a profoundly dark and disturbing reflection. Maybe I could use a self-help book or two, or perhaps just give up on being reflective altogether!

It comes to mind that in my early 70s I’ve been passing through this last plunge from the big hill for some time now. Where life passed slowly in the beginning. It now seems to pass at breakneck speed with hardly enough time to see the sites. This puts me in mind of Japan and the 20-foot cows of the Shinkansen. Let me explain…

Japan used to, and still may have, a wonderful opportunity for visitors to experience the Shinkansen’s, bullet trains that carry passengers from one end of the main island, Hokkaido, to the other in just a few hours. The Shinkansen’s travel at or around 200 miles per hour. Yes, I realize you can board a jet, 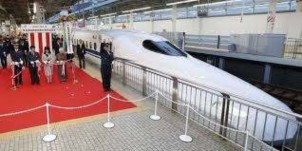 bouncing and wallowing your way from destination to destination around the world at some 500 miles per hour wondering the whole time if you will end up as an ink blot in an Iowa corn field. I find it much more impressive to board an earthbound train that glides from city to city at 200 miles per hour as if floating on a sheet of silk. All the time, conveying the feeling of reliability and precision through the throbbing of the motor at its heart. That perfect throbbing alone lets one know that the destination will be reached safely and in perfect harmony.

Even at this breakneck speed, the passenger can walk about at their leisure as if home in their own living room with little sense of motion and fantastic food purveyed on tidy carts by pleasant and precise staff members right at your seat. The trip is also not without ritual as the perfectly uniformed relieving engineer bows to their new train upon its arrival, and the departing engineer bows to the train as it leaves the station. There is much bowing in Japan, as opposed to the slap of the back and posterior we enjoy here in America, or the ritual handshake exchange of microorganisms we seem so fond of. Frankly, I kind of like the bowing. There is a lot less handwashing and checking to see if somebody stuck a note to your back. But we are getting way off the tracks.

The opportunity I originally spoke of regarding bullet trains is that a foreign visitor could purchase a Japan Rail Pass that allowed a certain period, like a week perhaps, of unlimited riding on the Shinkansen’s during your stay in Japan. Shinkansen’s are usually very expensive, beyond the means of the average Japanese traveler, and first-class is higher still. A first-class pass is offered to visitors at a bargain price, and if it is still available in the future, it is something a visitor should not miss out on.

On one of our early trips to Japan, Annie and I decided to spend two weeks just kind of “hanging out” around the country. With a first-class rail pass, our idea was to travel to a different part of Japan each day, and with the help of these incredible trains, be able to see most of the country during our stay. It was a great plan, but there was just one minor little problem. Of course there was. In the U.S. military, the only part of our government that actually works, mainly because they don’t let the monkeys vote on every little detail, teach “no plan survives first contact .” However, they say to have a plan anyway, but always be ready to bomb the crap out of anything that screws up your plan. Good advice.

The cities of Japan, generally speaking, are built through a series of coastal valleys bordering on the Pacific Ocean. These valleys, separated by steep hills, are useful for tea farming. Bullet trains do not find steep hills to their liking. In fact, if a bullet train did try to top a steep hill, a brief rainbow consisting of train cars would arc across the sky. The smoke would conceal the carnage that followed. The Japanese cleverly decided to build many tunnels through the hills to join the coastal valleys as an alternative to making train car rainbows.

Boarding the train on our first expedition, we were prepared for breathtaking scenery, this time from Tokyo to Kyoto. The train entered the first tunnel, speeding along at 200 miles per hour, and darkness enveloped the car. The train exited the tunnel into an explosion of light, traversed the narrow coastal valley and small town in seconds rather than minutes, and plunged once again into the darkness of the next tunnel. Annie and I could not look at each other in the ensuing darkness of the latest tunnel. I asked her “did you see anything?” to which she replied, “there was a bright flash, and before my eyes could adjust, it went completely dark again. I think I might have gone blind.” This same result occurred several more times as we passed the small valleys and tunnels, forging on toward Kyoto.

Eventually, we passed through a larger valley. For the first time, we had an opportunity to adjust to the blinding sunshine and see actual objects. Flying in high-speed airplanes does not convey a great deal of perspective because of the heights involved. Passing clouds, at those heights and speeds, a cloud still looks like a cloud, no matter how you look at them. So not much information is conveyed when you pass one at 500 miles per hour. But passing things at breakneck speed on the ground certainly conveys a whole new perspective on the effects of speed on perception. Passing everyday objects at those speeds highly distorts the objects, making them longer and kind of blurry. Einstein would appreciate this observation because it mimics the effects of general relativity.

People look sort of fat and blurry, houses look really long and blurry, and time seems to be flowing at a different rate. At one of the wider valleys, we passed a dairy farm, and as we screamed along through a pasture of cows, I remarked to Annie “Did you see that! My god, that cow must have been 20 feet long, but it was kind of blurry, so I couldn’t tell!”

The Shinkansen’s, from a sightseeing point of view, proved to be mostly a bust. Still, I did see a 20-foot cow and, as we passed other bullet trains going the opposite direction, we did get a first-hand idea of what it would be like to have a train go through your living room at a combined speed of 400 miles per hour. Good information to have.

At any rate, one might ask, what does any of this have to do with me being 70 some years old. Well, it is simply that life at this age is kind of like riding a Shinkansen. It is probably more important at this point in life to check out what’s on the snack cart rather than look out the window.