Life always begins with a family, at least so far; maybe tomorrow there will be variations to that ancient paradigm. ​​ My life started in 1948 outside Eau Claire, Wisconsin, in a small older house at 3447 Hallie Lane. I showed up relatively late for the party, so to speak, in that I doubt my parents anticipated having another child that late in life. Better late than never, I set out to make the best of it as my dad had taught me to do.

Our house was partially surrounded by wooded hills. When I was very young, I remember hearing wolves howling at night when I was going to bed. When I grew a little older, I spent most of my free time alone in those hills, exploring, eating wild berries, and throwing rocks; the ideal activities for a boy of that age and time. ​​ And for the wolves, my dad told me about his experiences with them and that there was no reason to be terribly concerned, so I wasn’t. No other boys of my age lived nearby. As a result, my explorations were a solo endeavor, and I became accustomed to spending long hours alone with my thoughts. 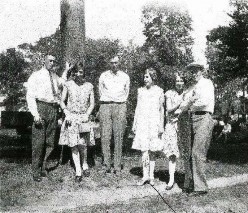 My mother was 100% Norwegian, speaking some small amount of Norwegian and having both parents, and at least one of her brothers arriving in American fresh from Norway. As she was named, Hazel was hard-working, stern, and determined to raise good children, even though her health was waning. She was a great mother, and I am grateful that she cared so much about me.

My mother was strident and hardworking, with high expectations for her children. She was very devoted to her many sisters and brothers, enjoying the large family gatherings of the Plomedahl family immensely. As was often the case in those times, she baked weekly to keep the family stocked in bread, pies, and all manner of delicious fare. Her fare was made with skill and precision and was, indeed, delicious. Her expertise with a “ringer washing machine” was remarkable (I only saw her get her hand stuck in the roller mechanism once in my childhood). Her canning and preserving skills were on display much of the year to ensure we had a wide variety of fruits, vegetables, jams, and jellies to help us pass through the bitter winters we experienced there in northern Wisconsin. I remember how very pleased she was that in the early 1950s we, at last, were able to amend a small addition to our equally small house, and in that addition was housed an indoor toilet! The plumber’s arrival on the big day of installation inspired great confidence as he carried the new toilet into the equally newly constructed bathroom. He was a portly man of some 300-400 pounds, and the small captive toilet in his grasp was dwarfed by his wobbling mass. Placing a thick ring of wax for the seal over the pipe flange, the plumber put the toilet on the wax ring and gathered the bolts to fix it into place. My mother, being concerned the work not be done improperly, asked the plumber, “how can you be sure that seal won’t leak?”. ​​ At which point the plumber replied confidently, “I sit on it!”, then proceeded to do precisely that. Under his great mass the seal yielded, probably with a shrill cry of anguish, if one could understand the unique language of such fixtures, and the toilet was soundly grounded in its new home.

I can sincerely say that the necessity to utilize an “outhouse” during the winter in northern Wisconsin, at often -20 to -40 below zero, does leave one with memories that are both inspiring and indelible in equal measure. ​​ I only had to endure this until I was about 4-5 years old. I would not venture to guess what effect this had on my siblings, particularly my sisters.

I remember vividly the enthusiasm my dad and I enjoyed when we, in the aftermath of this new addition, had the pleasure of tipping over the outhouse, burning it, and filling in the “glory hole”. So, I have fond memories of my mother, even though through my childhood she was in very poor health and, for the most part, did not feel well at all. ​​ She suffered from what was called malignant hypertension, or uncontrollable blood pressure. Her medication for this condition was strong with many unwelcomed side effects. She died in almost the same year of age as her mother, from the same malady that her mother had shared.

My dad, Bayard Knight, was from a family of Scottish lumberjacks that also farmed at various times. He was a hard and determined worker that stayed employed, even during the great depression. His experience as a lumberjack was extensive, and that was how he provided for his family in their early days. His life was kind of an inverse version of my own. He began in one of the oldest occupations known to man, that of a logger, and ended his career in the advanced world of fabricating nuclear weapons. I began in the high technology semiconductor chip industry and ended my endeavors in a very old one, the growing of coffee.

My dad was a remarkable man. He was unbending but generous, strong but kind. He was tougher than I am, and in some ways, probably smarter. I was fortunate because by the time I came along my dad had more free time, and​​ not wanting to spend this new found time at home, in the interest of domestic harmony, more specifically​​ his​​ harmony, he discovered me as the perfect excuse to get out of the house. “”Don” needs to learn things!” he would pronounce, “so we’re going fishing”. My dad always called me “Don.” That’s not my name, that’s my brothers’ name, but regardless how often I pointed this out, it seemed to have no effect at all. So, I became content to answer to “Don”, “Bosco”, “the hired man,” or any of a variety of pseudonyms my dad used. But, as a result of my dads’ desire to regularly disappear from the house with me in tow, he and I spent virtually all of his free time together, either building things or perfecting the art of fishing in high-risk destinations. After all, why fish someplace safe when you can fish someplace dangerous? Maybe this concept is not transparent to you, but it would have made perfect sense to my dad.

In our travels, my dad thoroughly enjoyed lengthily recounting his and his family’s history and adventures. Far be it from my dad to embellish, but only a little, to make the stories more captivating of the listeners’ attention. As such, I learned about his life as a logger in the early 1900’s in the Mississippi Valley. My dads’ early experience as a logger had shaped him in many ways. Here is an insight into how some of that shaping occurred.