Being a pioneer can occur in one of two ways. ​​ One can either hitch-up a wagon and set out for where the discovery will occur, or more simply, one can just happen to be lost and just standing around when the wagon arrives. The latter was how I became part of the early days of Silicon Valley. But, no sense in getting ahead of myself here because the journey is often much more interesting than the destination.

My journey began at an early age. After leaving home, due to a shortcoming in expectations on several people’s part, shall we say, I decided to undertake an emergency relocation from Eau Claire, Wisconsin, to Boulder, Colorado. Upon reaching my destination, I returned to high school there, eventually living as a ward of the local constabulary in a rather strange story by itself. It proved to be rather interesting to have to schedule an appointment with the head of detectives to go over my math test results, but indeed, that was how my life evolved. My being a ward of the local police department was not a result of the indiscretions I had undertaken. Rather, the acknowledgment by all concerned that I was, now at the age of 16, simply not willing to test the environs of Wisconsin again.

So, it was decided best to simply let me stay in Colorado with the local police department detective’s unit agreeing to be my guardian for some months. This couldn’t happen today. It would be too brave an act for our public officials to approve of. I have no doubt that the police of today would agree to do something like that. Police tend to be brave and concerned people, ready to take a hand in making whatever is around them better. Today’s government officials, however, in their timidity, prevent the police from carrying out much of their essential work and would have surely fled in unhinged panic at the prospect of taking a hand in my plight. Thankfully for the government officials in those past times, control was left in the hands of those most proficient at such work, and my life was set on a proper course with diligent oversite.

As my 16th year passed, and with good grades that satisfied my law enforcement handlers, high school for me was a mixed experience

of both opportunity and challenge. Boulder High School was a large school with a great many students. I’m not sure how many students there were exactly, but they seemed to be everywhere. Not having been around many people in my childhood proved some challenge.

However, it became clear this great populace of students represented a market for services that needed filling. Living on my own, I too had needs to fill, as in “funding.” I had acquired a job as an evening short-order cook at “Bennetts Restaurant”, on “the hill” in Boulder, but it was clear that the culmination of my dreams existed somewhere beyond that plateau of fiscal reward. However, “Bennetts” was the center of the “for money” games of “gin rummy” in the University District, and so, a very opportune place to be in the later hours after my shift had ended. The games became “robust” in those late evening hours, and success could be realized. My desires for a more assured monetary existence were still left lacking. So, it wasn’t long before I discovered that a small venture into grade cards, hall passes, and quart bottles of Coors beer, sold under the stage at regular hours of operation, could produce large returns. Such supplies as were needed, including blank grade cards, signature stamps, and the Coors beer, of course, were “requisitioned” by the commensurate means necessary, shall we say.

Before long, I had a thriving business of repeat customers. Grade cards, issued one for each class, were a once each quarter affair, and for those unfortunate students that had somehow fallen victim to a low grade in a particular class, I would willingly provide a new NCR paper grade card at the modest price of $4 for an “A,” $3 ​​ for a “B,” and the paltry sum of $2 for a “C.” Many students were spared an uncomfortable moment with their parents thanks to the services I generously provided. Hall passes, also called re-admit slips, were a daily staple going for $2 each, and available at any time for those that had cut class and needed some mechanism to re-board the train of acceptance and legitimacy. All of this business was conducted at a candy store just around the corner from the high school. The store was operated by an elderly couple, the Morris’s, that found it amusing that “this young man,” as they referred to me, had taken on such an “enterprising endeavor.” They even let me stand behind the counter to provide my services and also, I suspect, appreciated the extra trade I drew to their store.

Inevitably, as these things go, I was apprehended after a year or so, specifically for operating the Coors bar under the stage, having been ratted out by an unhappy customer that owed money. My high school days, as a result, came to an unceremonious and abrupt end by being thrown out of school. I was devastated. So was my income.

Having a good deal more spare time on my hands, I quickly found gainful employment at a nightclub, again on “The Hill” in Boulder. Managed by a group of older Italian men, I was taught the art of making various menu items with my specialty to be pizza dough that was needed in great quantity. During one of my early lessons at making the dough, 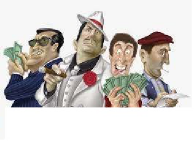 one of the older Italian men explained to me “you can’t knead the dough too much! It’s gotta be just right. You wanna kneed it until it feels like a young girl’s breast.”. ​​ I nodded at him, being disinclined to explain that I had no idea what that felt like. Working there for some time, I came

to notice that after closing, there was always a gathering of Italian men that would drink wine and eat pizza into the early morning hours. Stories would be told, wine would flow, and eventually, it became clear that these were no ordinary Italian gentlemen. In fact, it was finally divulged that these were “family men” so to speak, all members of the same family, and that family was The Smaldone Family, better known as Mafia Guys!

So, my vistas expanded, and I realized two things, the first being that hanging around late at night and making them pizzas was highly fun as well as informative. Secondly, that it might be a good idea to make the pizzas just right, or something unpleasant might be offered in terms of compensation. In the end, I got to hang around many nights listening to these guys explain their “theory of business.” I became exposed to an entirely new concept of profit and loss, one that seemed to imply “I profit, you lose”. For some reason, they seemed to take a liking to me, and usually referred to me as “kid.” I came to think of them as not too bad of guys, when they were not shooting people or whatever mafia guys do when they are working. And I eventually learned what pizza dough should feel like.

However, after some period of time, and not a great deal of thought, I soon found my dads oft-talked-about lure and prospects of Alaska irresistible. With a female traveling companion some years my senior, herself seeking new vistas due to boyfriend problems, we set out for the coastal paradise of Alaska, and the commercial fishing destiny that I was sure awaited me there. I was a freshly minted 17-year-old with a book of dreams filled with mostly empty pages.

She was what I viewed as a supremely worldly woman of almost 20 years. It was an accident looking for a place to happen, and it didn’t take long. This journey proceeded smoothly with the acquisition of a $50 1952 Chevrolet, enough money for gas, and at least several meals. For my traveling companion and I, prospects took a turn for the worst at, or just around, the northern California border. The $50 car began to feel like a $25 car, and the money proved to have a limit in its endurance. With the outlook for Alaska bleak, we decided to make for a little town called Mountain View in Northern California. My traveling companion had a friend that would probably give us a brief respite until the money supply could be recharged and the journey to Alaska rejoined. Conveniently enough, the $25 car made it just to the border of Palo Alto before experiencing its last moments of life and passing to the great beyond along some remote mountain road in the Los Altos Hills.

Faced with what I viewed as only a brief and modestly inconvenient delay in my Alaskan commercial fishing career path, I decided to gain some useful employment, collect adequate funds, and rejoin the journey north as soon as

circumstances allowed. However, without any prior intent, and through a remarkable moment of profound misunderstanding, my traveling companion and I had become “entangled,” shall we say. This breathtaking misunderstanding passed uncorrected by me in that, after having, in my view, already failed one woman, that being my mother, I would certainly not repeat the error by not standing up and saving this one! But, she claimed to enjoy fishing, a claim later proving greater than its’ means, and so, at the age of 17, this seemed good enough reason to me, so we cast our lots together and prepared to move ahead.

Faced with what I viewed as only a brief and modestly inconvenient delay in my Alaskan commercial fishing career path, I decided to gain some useful employment, collect adequate funds, and rejoin the journey north as soon as circumstances allowed. ​​ However, it is fair to add at this point that without any prior intent, and through a remarkable moment of profound misunderstanding, my traveling companion and I had become “entangled,” shall we say. This breathtaking misunderstanding passed uncorrected by me in that, after having, in my view, already failed one woman, that being my mother, I would certainly not repeat the error by not standing up and saving this one! But she claimed to enjoy fishing, a claim later proving greater than its’ means, and so, at the age of 17, this seemed good enough reason to me, so we cast our lots together and prepared to move ahead. We were married.