Hawaii has special benefit to anyone doing business in Asia, and Japan in particular. Imagine sending an email early in the morning to your customer in Tokyo that says, “I’m here in my office in the U.S. looking through your update, let’s have lunch”. You can do that in Hawaii! And it was one of the reasons I really enjoyed living there. By taking an early morning flight out of Hawaii the plane will arrive in Tokyo with plenty of time for a late lunch, and after lunch you can be back on the plane for an overnight flight back to Hawaii. It is the ultimate “power lunch”, left the Japanese executives remarkably and favorably impressed, and included the benefit of no jet lag when you got home! So, I finished my time in the software industry there in Hawaii, eating raw fish, drinking too many Mai Tais’ and finally being warm. It was wonderful.

Hawaii has special benefit to anyone doing business in Asia, and Japan in particular. Imagine sending an email early in the morning to your customer in Tokyo that says, “I’m here in my office in the U.S. looking through your update; let’s have lunch.” You can do that in Hawaii! And it was one of the reasons I really enjoyed living there. By taking an early morning flight out of Hawaii, the plane will arrive in Tokyo with plenty of time for a late lunch. After lunch, you can be on the plane again for an overnight flight back to Hawaii. It is the ultimate “power lunch,” left the Japanese executives remarkably and favorably impressed, and included the benefit of no jet lag when you got home! I finished my time in the software industry there in Hawaii, eating raw fish, drinking too many Mai Tais’ and finally being warm. It was wonderful. 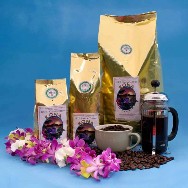 The high technology sector was very good to me yet again. Still, I really wanted to get back to something that involved the immediate gratification of physical labor. Something where the moving parts didn’t spend each day complaining about something. With Annie’s horticultural skills and my perpetual willingness to charge off blindly in a new and unexplored ill-advised direction, we took on the endeavor of setting up a coffee plantation and a coffee company. We purchased land on the slopes of the Mt. Hualalai volcano on the big island of Hawaii. After all, in her life, Annie had recurring dreams of living on an exploding volcano and being chased by lava.

That must be, we figured, a sure sign from some mystical place that it was the exact right thing to do. Our newly cleared land was in the Kona coffee district on the Big Island of Hawaii. We began by clearing wild pig-infested jungle to make, room for coffee trees. From this, Kona Premium Coffee Company of Holualoa, Hawaii was born, and the pigs were out of a home.

If you are ever going to farm anything, my suggestion would be coffee. As farming goes, it is probably the lightest-duty kind of farming, and it really doesn’t demand the sort of rigor that most other farming demands. Some of my family and Annie’s were Iowa farmers, who were and still are, tolerant of brutally hard year-round work that requires high intelligence and skill. They also have inexhaustible tenacity and the humble patience to accept the comings and goings of nature’s forces. In the end, however, farming is still farming. So we began this new enterprise by digging thousands of holes in the lava-crusted ground by hand to plant the coffee trees that would provide the futures’ hoped-for bounty.

This presented me with the opportunity to work next to a group of hard-working people from Mexico that I very much enjoyed and found kinship with. I worked with Mexican people a 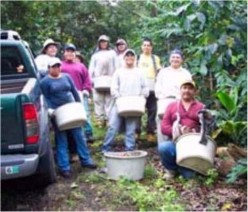 great deal throughout my life. Building steel boats involved punishing, difficult work that men from Manzanillo, Mexico, had great experience and skill at doing. I was fortunate to have a group of these people to help me in that endeavor.

Even in the early days of Silicon Valley, when labor for high technology jobs was difficult to find, Mexican people whose families lived there since the times of the Spanish missions left the fields and orchards of the Santa Clara Valley to take up work in the new cleanrooms of the semiconductor industry, experiencing and sharing in the wealth that came to follow. In all of these varied activities, the Mexican culture have always struck me as an excellent people with a generous and caring nature. I have learned that working next to them, doing the same labor as they were doing, sharing meals with them, I came away with some of the best and most loyal friends I have had in my life. Good friends.

Our coffee business evolved to include processing, roasting, and packaging. Ruben Jacobo was always there next to me, my great friend and a farmer himself from Puebla, Mexico. He and I planted thousands of coffee trees, each one by hand.

Ruben usually left me in the dust in holes-per-hour but did have the somewhat inconsiderate habit of not sweating. I was a different story… let’s just leave it at that! Later he and I built coffee processing buildings to house the pulping and warehouse operations. Later we built a coffee roasting, packaging, and shipping facility to keep pace with how fast the business grew. All the coffee was roasted and shipped fresh daily on Federal Express. The trees were a special genetically selected variety that Ruben had grown from seed. Our average tree produced two to four times the coffee of the average Kona Typica coffee variety.

The plantation was beautiful when the trees matured. To add to the beauty of it all, Annie, a very skilled horticulturist, added a large botanical garden that was usually the highlight of our coffee plantation tours. This botanical oasis was filled with palms, flowers, ferns, and spices of all sorts to give visitors the true feel of Hawaii. Annie was the visitors’ highly knowledgeable, enthusiastic, and very attractive tour guide. At times we were visited by corporations in Hawaii for business activities, conferences, or meetings. Groups like this visited the farm, so it was not surprising to see tour buses in our parking lot from IBM, Intel Corporation, and so forth. It seems word got around that we built this really nice coffee destination, so companies found it great fun for their employees to tour, get a free cup of pure Kona coffee, and learn about how the second oldest industry in the world carried on. As a bonus, I saw old acquaintances from my technology days from time to time when they attended or sponsored these tours.

One afternoon I received a phone call while working on the tractor in the field. The call, it turned out, was from a producer for PBS television, and they produced a PBS series called “The Creative Life” that starred Cheryl Fall. The producer explained they heard about some of the awards our branding and coffee won and wondered if they could film an episode on the plantation. That sounds like fun to me, so PBS brought their production crew to Kona, and the show was filmed. The series is still shown from time to time on Public Television and includes scenes of Annie showing her skills at the roasters and Ruben keeping the processing operations flowing at peak Chery Fall efficiency. It was a nice event, and I appreciate PBS taking the time to show what farming can be in this new technological age.

We sold our coffee, all that we could grow and more, through our internet site to destinations around the world. The high roller suites at the casinos of Macau, stock trading floors of Wall Street, and the mountainside homes in Beverly Hills put our coffee to use at frankly embarrassingly high prices.

So too did our soldiers in Iraq and Afghanistan that received our coffee at no charge when we found a unit in need of some upscale caffeine. Imagine our empty coffee bags blowing across the deserts of Iraq. What a truly romantic and inspiring image. I figured, if your product succeeds in becoming the trash of Iraq, well, you’ve arrived! To increase our supply of coffee, we took over management of other coffee estates so that we could have access to more coffee and the demand could be met.

However, when the business became successful and mundane, I again was drawn to look around the next bend of the stream, wondering what might be there, as had been the paradigm of the past. In my view, success and the money that followed has never been an end, only the adventure of getting there held value. The coffee operations and plantation were sold, and we set out again to find some new and interesting shore.

We returned to Washington State, only this time to the tropical south, tropical being a relative term. Washington, in my experience, is filled with generally worthy and kind people, dramatic climates, and awe-inspiring geography. It was a good place to end up. I wonder at times about what, if anything, comes next. Whether this new stretch of water in my and Annie’s life is the ocean at the end of the stream, or just another slow-moving eddy between new fast currents. I don’t know, I never really have, and when I ask, nor does she, it seems. As it is with life, one must get about floating past that next bend. It is, after all, the only way to know what really is there, and it is always the case that somebody should go take a look.