Why do people fish? I have wondered endlessly about that question. Why did my dad fish almost every moment he had available, and why do I not consider a dollar well spent unless at least half of it is devoted to purchasing some kind of new fishing gizmo, one I am sure will provide a new level of success to my fishing endeavors. I have asked a few important visitors to my life about this over time but still don’t have confidence I am close to finding the issue resolved. For instance, when I was about 8 years old, I asked my uncle Glenn why he went fishing all the time. His reply was, “well, you know, it’s because you never know what you are going to catch!” After taking a moment to seriously contemplate what he had told me, and with a thoughtful nod to his imparted wisdom, I replied that it made perfect sense to me. Later in life, however, I discovered the same thing could be said about consorting with women of questionable reputation. That reason lost much of its luster, and I renewed my search for the true meaning of fishing.

This search has continued for over seventy years now, and I am still uncertain why the simple act of fishing can captivate certain individuals. Sometimes to such an extent, they seem to regularly careen off the tracks at the mention of a certain lure or a strip of artfully cut pork rind fluttering in the water. But I did once hear a remarkable insight into fishing, 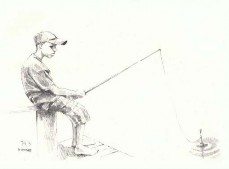 commercial fishing in particular, that rang out with the clear note of truth. This shining ray of understanding came to light at what could be termed a commercial fishermen’s union meeting. Now, calling commercial fishermen gregarious and socially engaging would be kind of like calling a 2,500-pound stellar sea lion the perfect house pet. Still, commercial fishermen do have their small get-togethers when the wind blows, and as long as those occasions include beer and sufficient time for stories to be told.

At one such rare assemblage, the conversation got around to what it would be like to have “a million dollars.” Commercial fishermen, almost without exception, have no experience at all at having a whole lot of money, so it was a great subject to discuss a little bit to get the “read” of the local waters on this issue.

Well, the subject kind of went back and forth around the room with the typical types of things proposed. Moving to Tahiti (commercial fishermen fantasize a bit​​ about simply being warm). Heading to Las Vegas to try and triple the heat (another massive character flaw present in most fishermen). And some just wanted a bigger boat, mostly all commercial fishermen want a bigger boat. As it came around to me, I mumbled something incoherent about getting a bigger boat or world peace, but mostly concentrated on keeping my head low because I knew what I would do if I had a million dollars. I did, and I was doing it, and they didn’t know that.

I was not the only one in the room keeping a low profile. Not too far away sat Al Shugart, another Silicon Valley guy with a second life and insatiable passion as a commercial fisherman. Al had started a little place called Shugart Technology, and the name was later changed to Seagate Technology. If you ever owned a personal computer, you probably gave Al money. Al sat too kind of taking in the sights on the ceiling while this discussion unfolded.

Well, at the back of the room, there sat Stan, an old fisherman. He never really talked much, nor did he suffer the blather of fools with any degree of patience whatsoever. Stan simply observed the world around him with intense scrutiny while taking long pulls on his ever-present bent briar block Meerschaum pipe. We all regarded Stan as remarkably intelligent and well-read, so when he talked, he was intently listened to by those in attendance.

Stan ran a traditional net boat, a vintage vessel that endured more than half a century of punishment at the hands of the sea. The boat had survived in kind of the visage of an aged prizefighter whose face was a map of scars tracing each past encounter. I had come to know Stan by chance when the slip next to Stans boat came available, and I needed just such a slip being new as I was in the harbor at that time. It seemed that Stan represented a recurring and rather thorny problem for the harbormaster.

Stans dock, next to his boat, was always covered with an obstacle course of net gear, fish boxes, and other detritus that Stan claimed was vital to the operation of his fishing enterprise. In addition, upon cleaning his nets, Stans dock would inevitably collect a daily assortment of things that were either alive or with the appearance of having once been so.

These past and present creatures would fall from the nets, and with a little help from the sun, fill the afternoon breeze with a fragrance that, at best, could be called “Eau de Low Tide”. As a result, the harbor could not get anyone to stay in the slip next to Stan, nor stem their effusive complaints, given the daily obstacle course present there accented by what one might term a “unique and moving” olfactory experience.

The harbor master, sensing my desperation and vulnerability I suppose, suggested “well, I do have one slip available, but I should mention, its next to a fella named Stan”. ​​ I had heard all the stories about Stan and his war with the neighbors, and thought it would probably work out just fine, or at least provide a new source of some humor. So, I assured the harbor master this was going to work out great and told him “you can consider this problem solved!” after which he replied with one squinted eye, “We’ll see..”.

As I prepared to move into the new slip, I decided that it was perhaps time to have a little fun at Stans expense, to introduce myself, and being new to that part of the harbor I suspected Stan did not know me. The next day I donned my “sail boaters’ outfit”. Commercial fishermen hate all sailboaters by the way, mainly because they always think they have the right of way. Of course, they don’t, with fishermen generally referring to them as “ragheads”. A sailboaters outfit could generally be described as snappy deck shoes, tasteful slacks, and topped off with some kind of a polo shirt. Donned in a similar motif and sporting my best bland smile and a camera, I headed for Stans dock.

Upon arriving, I noticed him sitting in the stern of his boat cleaning nets, and he watched me carefully as I got out my measuring tape and began taking measurements of the shared dock between his boat and where mine would be. Stan looked at me with increasing suspicion and concern as I puttered and measured and I waived my hands about as if placing imaginary items around the dock only to stop and rearrange them again. Finally, Stan couldn’t take it any longer and fell helplessly into my trap, as if ironically caught in one of his own nets. Rising from his seat on the net roller, he asked me in a no-nonsense and confrontational tone, “what are you doing?!”. With a look of unbridled enthusiasm, I leapt into my explanation;

I was bringing my sailboat to be moored there the following day, and I was measuring the dock for some new indoor-outdoor carpet we would install so my friends could come over, and we could all sit in our deck chairs and have wine in the afternoons. I assured him it would be wonderful and that he could join us if “that fishing work” allowed. Through Stans sunburned and weathered face, the pure red of rage rose to an almost heat-producing crimson flame as Stan rose, without a word, and stomped off down the dock headed toward the harbor master’s office, convinced his worst nightmare had descended upon him.

“Good God, Sailboaters!!” I’m not sure what the harbormaster told Stan, but I remember the look on Stans face the following day when I pulled into my new slip dressed in rubber fishing coveralls and in a big steel fishing boat that belched diesel fumes and smelled like fish.

Stan literally tripped on some of his own hazards as he hurried across the dock to help me with my mooring lines and give me a hearty handshake, welcoming me to the dock. Stan and I became good friends over the years, and he turned out to be the best dock mate anyone could ask for.

That brings us back to the aforementioned fishermen’s union meeting and the important question at hand; What would you do if you had a million dollars. When it came around to Stan as the only one who had not spoken to the topic, all eyes turned to him. Stan took a moment, nodding his head in deep thought while taking long pulls on his steeply curved pipe, and finally pronounced, “I would commercial fish til it was gone!”. And to everyone, that was the purest explanation of fishing that any of us had ever heard. You weren’t apt to make much money at fishing, but that didn’t matter. Fishing was not a means to an end; it was the end.