North America, encountered by early settlers and pioneers, was generally comprised of two great oceans of trees divided by a broad central plain standing over six feet high in buffalo grass. The native peoples lacked the technology to alter these elements in any significant way. For the most part, they relied on forest and 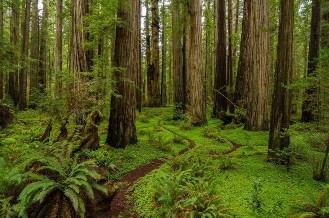 prairie fires and other naturally occurring events to clear space for game and revitalize the land.

Much like the deep oceans, where life is sparse away from the shores, the towering cathedrals of forest that covered most of North America offered limited opportunity for populations of large birds and animals to exist. ​​ These larger creatures, away from the buffalo prairies, depended on the random acts of nature, and the studious work of the beaver, to create new space for meadows, grass, field flowers, and wild rice. As a result, the native forest peoples existed in relatively small bands, widely dispersed to not overtax their food supply. Large villages like Cahokia were rare exceptions, existing by relying on trade. Sharing this harsh environment were the other people of the forests, large hungry wolves with keen wits and an ever-present eye for the next opportunity to sustain.

Into this environment came the early pioneers, ax in hand more so than a rifle, ready to undertake the task of reforming a continent. Clearing the forests of North America was no small feat. After hundreds of years of effort, the work continues today, albeit more sustained with an eye to the future. But these early pioneers had little time to consider the future. Their needs were immediate, and clearing the land for the farms to come was the first step. Lumberjacks were needed and in significant numbers.

My family, for several generations, were mainly lumberjacks. Wherever they went, first clearing land to grow food for their family, then cutting timber for lumber, ships masts, and warmth, their lives revolved around the cutting of the ancient forests.

One of my ancestors, related to me by my dad, would travel alone up near the great lakes each winter to cut a raft of select timber. These particular logs, tamarack mostly, unique by their perfect straightness, were well suited for ships masts, a particularly difficult tree to find. Tamarack is an Algonquian name, offering a clue as to how far north one must travel to find them. Then each spring, he would float this raft of valuable cargo down the St. Laurence river on the spring freshet to the shipyards of the east. One winter, as the story goes, he never returned.

Another member of the Knight family was the first man to ride a log raft over the rapids at Black River Falls, Wisconsin. In the 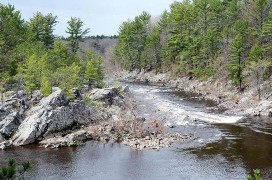 early 1950s, a small park was dedicated at Black River Falls to commemorate his accomplishment. The Knight family, my 6-year-old self included, and riding in the back seat with my grandmother Bessie, traveled there for the dedication. The small park is gone now, but the deed is still recorded in various places. “Log Driving” at any time was a dangerous business, with the Black River being uniquely so. The “drivers” had what was considered the most dangerous job in the logging industry, with daily dunking’s the rule and drowning an all-too-common outcome.

My dad worked as a logger early in life. He logged in the virgin timber of the Mississippi Valley in forests of fir and sugar pine of large girth, often 6 feet in diameter and greater. This was double-edged broad ax work, and he bore the scars on his feet to prove it. ​​ Double-edged broad axes have a nasty habit. When striking the tree at a just slightly wrong angle, they tend to glance back directly into the logger’s ankles and feet. If the logger hadn’t yet learned the reflexive action of turning the ax handle slightly when this mis-strike occurred, he ended the day with a nasty gash to his boot and, at times, the foot underneath. If he had learned the trick, he got away with just the side of a several-pound steel ax hitting his ankle with enough force to crack the bone if he was unlucky. Watching a skilled axeman with a double-bladed ax was truly remarkable, to say the least.​​

With just a few precise swings of the razor-sharp blade, chips of wood, each measuring in pounds, would begin to fly, and the tree was felled in just a few minutes. ​​ My dad seemed to never lose his touch at this skill, and with the cutting complete, the tree would fall exactly where he had intended.

The lumber camps that Bayard Knight worked at in his early 20s, along with his brother Glenn, were far from the closest settlements. They were connected to those settlements by “skid roads” formed by traveling teams of horses and oxen pulling loads of logs through the snow to a river or mill. 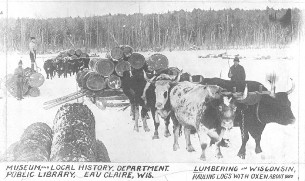 The men that worked at these lumber camps were, for the most part, “Swedes” as he related – big men that put in long hard, usually bitter cold, days of work, stopping only when the sun no longer allowed the work to continue. The highlight of the week, Saturday night, was looked forward to with great anticipation, perhaps it being a tradition in Sweden, my dad wasn’t sure. Saturday night was a significant part of what made this work worthwhile to these hard-working timbermen.

Each Saturday night, the men would put on their best clean shirt, have a hearty dinner, move on to drinking some whiskey, and then fight. It would be a brawl, with all discord and disagreements of the previous week resolved in short order. As I will explain shortly, my dad, having already made his contribution, would retreat to a top bunk and try to stay out of the way 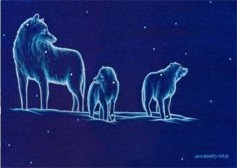 until peace was restored. Sunday arrived with time devoted to a little prayer, the nursing of cuts and bruises, and then back to work in the big woods.

My dad was found to be of unique value to the Saturday night events at these camps, and it made for him a special place that he much enjoyed. ​​ It seemed that, in these remote and wild forests, while larger life forms were scant, there was one other group sharing the forest with the loggers. Wolves.. Well, it seemed that the “Swedes” as a rule were deathly afraid of these wolves, not being familiar with them in their past lives as farmers and sailors. That presented a unique problem because each week someone had to go to the nearest settlement to get the supply of whiskey for Saturday night. ​​ A weekly chore in that the lumber camps did not allow whiskey in the camp during the rest of the week, knowing the inevitable outcome of mixing whiskey and loggers.

Bayard Knight had very little fear of wolves, his family having lived around them for generations. My great-great-grandmother was Metis Cree, and the Cree were known as the Wolf People, sometimes known to hunt with packs of wolves.

It was with no shortage of thanks that the “Swedes” gratefully let it fall to my dad to be the man that would set out each Friday along the skid road to hike miles to town, and return with a pack encumbered with precious cargo. On these trips, wolves occasionally danced and sifted through the trees at the sides of the road, following the traveler most the distance to town or back. My dad recalled this made him nervous but not fearful. As he explained, wolves are not foolish. They fervently avoid the risk of injury because in their harsh winter world, any injury can spell the. Knowing humans are dangerous, wolves would just follow, seemingly hoping their prey would keel over and die so dinner could commence.

One last recollection of my dad, in regard to his relationship with the giants of the forest, is later in his life he traveled in his pickup truck from Wisconsin to California to visit my home in Santa Cruz. ​​ Because of his history and that of the family, I suggested we go take a look at some really big trees. With great 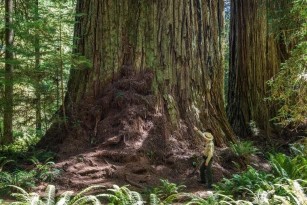 enthusiasm, we drove to “The Forest of the Nicene Marks”. The trees there are enormous coastal redwood, each one many feet in diameter and old beyond telling. We joined a large group of environmental enthusiasts at the Nicene Marks trailhead to see one of God’s greatest works of wonder. Not to put too fine of a point on it, but the bulk of this group were generally the most “huggiest” of the tree hugger species, and they were there for a religious experience. My dad would never, in my experience, say anything to intentionally offend or hurt someone.

Still, he was occasionally endowed with an exceptional ability to simply say what was on his mind at rather inconvenient times.

And so, it was with the utmost of ill timing, that as the group stood close together staring in silent awe at a particularly large and perfect wonder of nature, that my dad uttered to himself, but loud enough for all to overhear, “boy, wouldn’t it be ​​ something to cut that one just to see it fall”. The true thoughts of an old logger! In all of the silence present before his comment it somehow became even quieter in the moment that followed. As one, all of the heads in the group slowly rotated away from the enormous tree and toward our little family. As the expressions of each face changed from wonder to horror, I blurted out, into that vacuum of impending doom, the only thing that came to mind, “well dad, it’s getting late so let’s call it a day and just go back the way we came”. I doubt my dad even noticed the moment he had brought about. He was still too astonished by that immense tree.